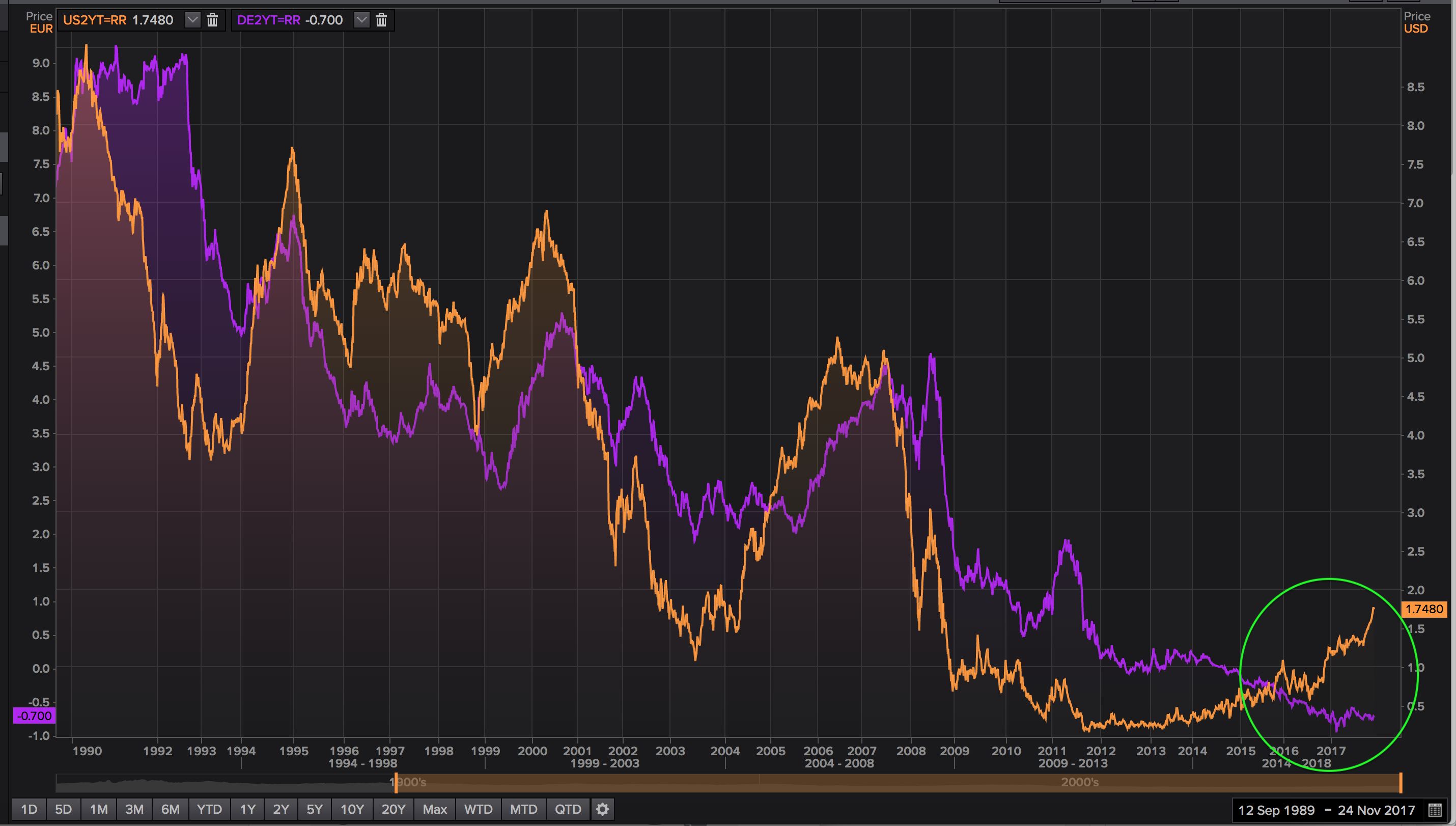 After a light week that was highlighted by central bank comments, we await a somewhat busier week with the release of several key indicators.

Let’s review some of the events that happened last week and look out to what’s to come in the week ahead:

Despite no change at last month’s meeting and a Fed seemingly confident to continue the hiking cycle in the near-term, the on-going debate between policymakers concerning low inflation rates casts doubt about the future path of interest rates.

Though most Fed officials are confident that the labour market will continue to tighten and this will eventually drive up inflation rates, some would like to see stronger signs of price increases.

While acknowledging that the unemployment rate is too low for inflation to remain at its current levels, there seems to be a debate whether current price levels “might reflect not only transitory factors but also the influence of developments that could prove more persistent”.

Yellen said something similar in a speech on Tuesday. On one hand, she said that she expects prices to rise higher, on the other hand, she remains “very uncertain” about this and they could stay at low levels for years to come.

A few member even suggested a new framework for the central bank, where it would allow the inflation rate to move higher in order to make up for times where it had been undershooting.

This all comes against the backdrop of a continuously flattening US yield curve. The yield of the 2-Year T-Note continued to rise, ending the week at 1.7480%. The premium over the German 2-Year Schatz now stands at it’s highest level in over 25 years! 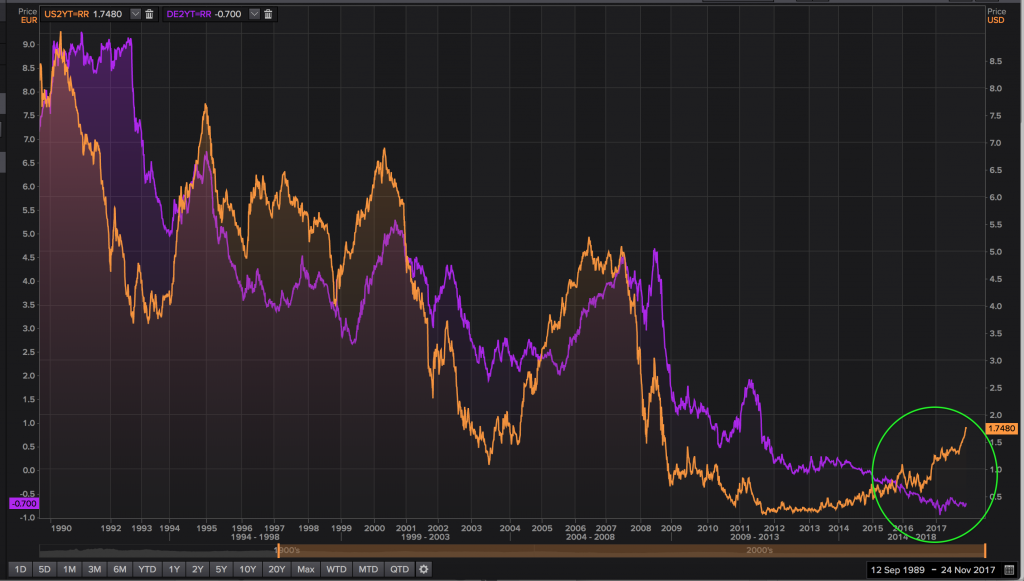 In the week ahead we are awaiting some interesting economic parameters.

Wednesday marks the release of the revision of the 3rd quarter GDP numbers.

On Thursday we await the Personal Consumption Expenditures, the Fed’s favourite inflation measure. The market sensitivity for this is on the rise and, as for all inflation measures, we expect this to continue. In September we saw a 30 pips reaction, following a -0.1% deviation.

Friday marks the beginning of December and we look forward to the release of the ISM Manufacturing PMI. After a surprising 60.1 build in November, it is expected to come down to a 58.3 level.

The Euro continued it’s rebound after the release several positive indicators out of the Eurozone.

On Tuesday, a strong reading in German Manufacturing PMI (62.5 vs 60.4 expected) produced decent reactions in both EUR/USD and DAX. The Euro initially spiked 10 pips higher. The spike’s start marked a strong support level for the bloc’s currency that it bounced off twice over the course of the week. 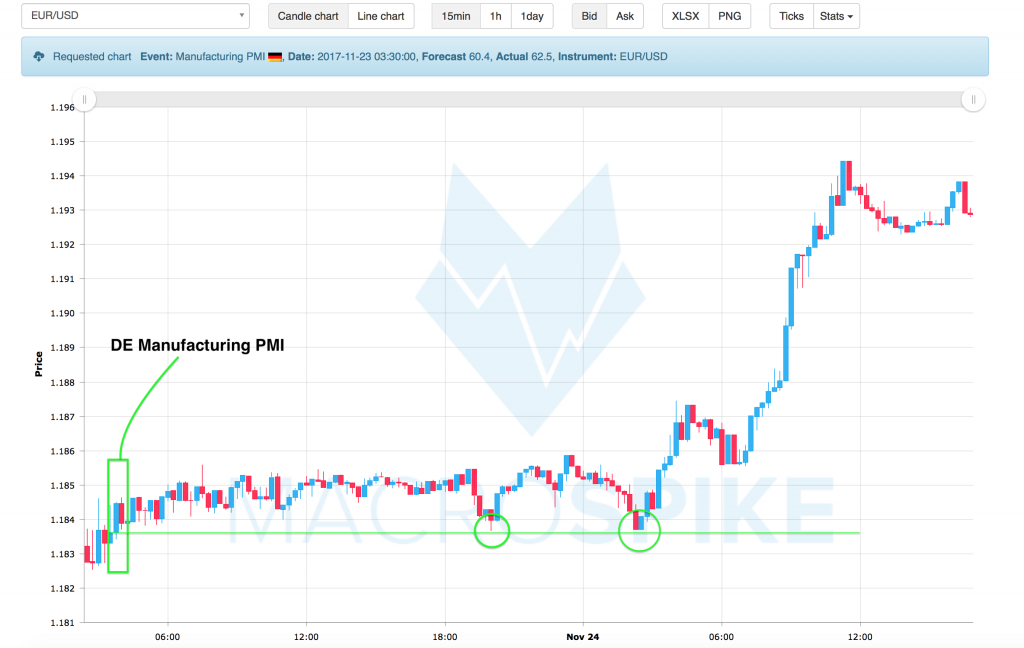 It’s interesting to note that we observed a positive correlation between the two instruments at the time of the release. This lets us believe that movements for the German equity index are driven by rising growth expectations for the Eurozone’s biggest economy. The German economy has seen strong growth over the last years and while a strengthening currency could dampen that, it seems like for now the market believes otherwise. 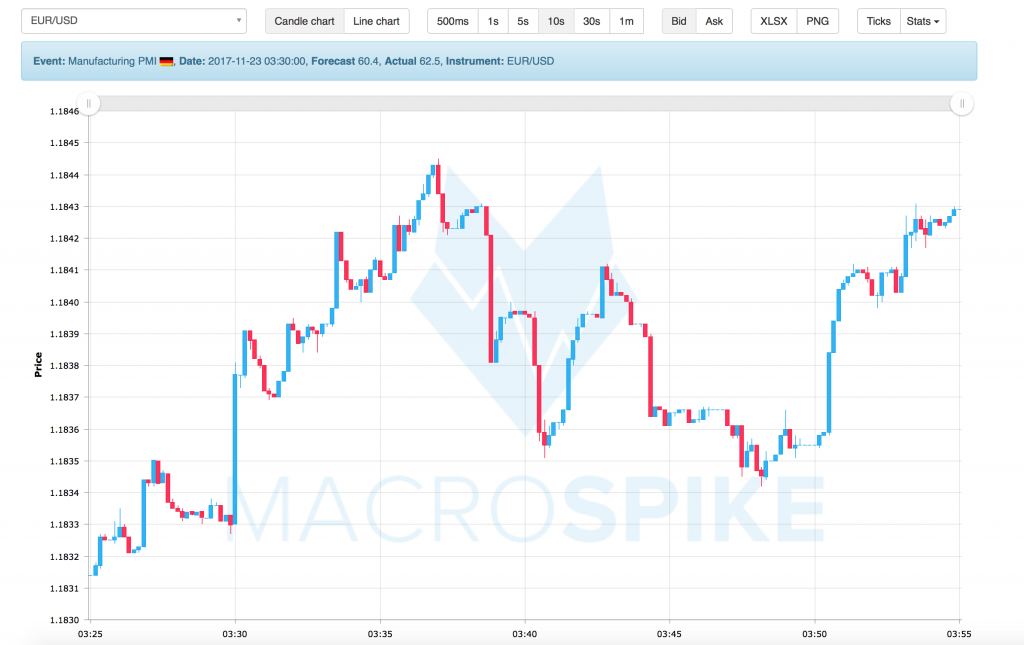 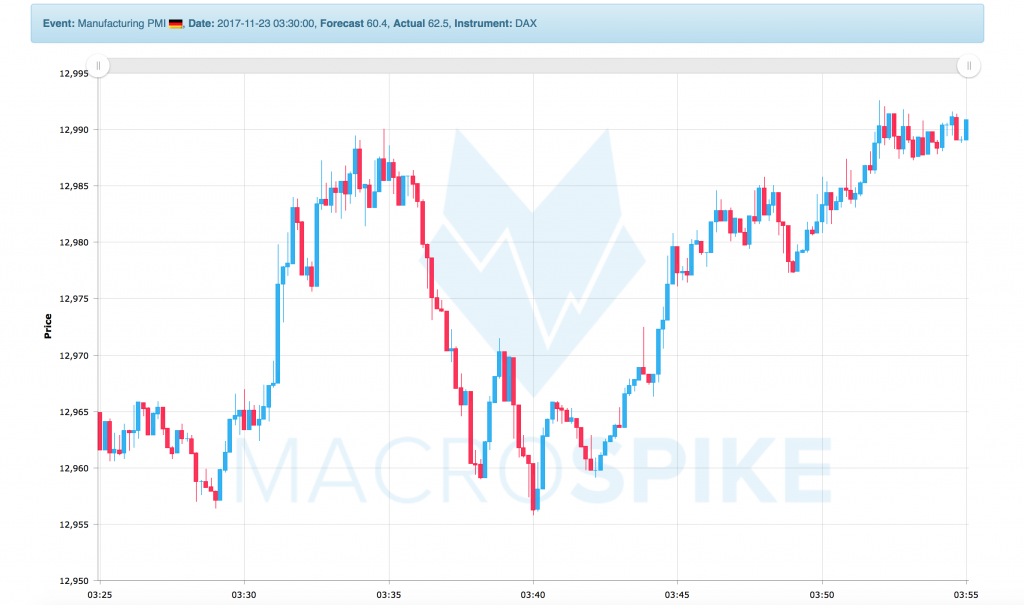 Wednesday’s release of the Minutes of October’s ECB Meeting showed there was broad agreement between European central bankers on their plans to reduce the ECB’s Bond Buying program. The central bank is set to cut back purchases of their QE program by half to 30bln € per month early next year with a minimum duration of 9 months until September 2018.

Next week we await the Flash CPI Estimate for the Eurozone. Expected at 1.6% after a prior reading of 1.4, the indicator seems to be moving closer towards the central banks’ target.

Though interest rate changes are off the table for the EU, any sign of additional inflationary pressure can move expectations further into the present.

Great Britain’s currency remains overshadowed by the insecurity of the Brexit negotiations.

Silvana Tenreyro, the new member of the Bank of England, made clear that even for central bankers anticipation is difficult in an environment like that. Their preparation is for interest rates to go either way. Given the lack of available data about such a historic move, all that is left for the central bank is to react while things unfold.

“People up until recently thought that Brexit meant monetary policy would remain highly accommodative and interest rates would stay low forever,” she said. “But Brexit might present other challenges that require the opposite. It might require an adjustment either way, and it’s not obvious. That’s something to be prepared for.” [Courtesy of Reuters]

However, Bloomberg reported that she was expecting two more interest rate rises in order to curb the inflation rates over the central bank’s target.

The Pound rose to a six week’s high and moved beyond levels it sold off following last months interest rate change.

Next week, the only indicator we await is the UK’s Manufacturing PMI.

The Loonie’s behaviour this week was a perfect a mirror of its performance the week before.

While last week we saw the greenback advance strongly against its neighbour’s currency, the Canadian Dollar strengthened mid-week and returned to the level it printed two weeks ago.

After three quarters of strong growth and two rate hikes in Q3, the Canadian economy has seemingly slowed down and the BoC has adopted a “wait-and-see”-policy.

Governor Poloz reiterated over the course of the month that the central bank is “strongly data-dependant” and in order to continue their hiking cycle, policymakers would like to see stronger signs of inflationary pressure in the economy.

Last week’s CPI showed a 1.4% print for the year-on-year data, far away from the central bank’s 2% target.

This week’s main event was Friday’s Core Retail Sales that showed a mere 0.3% growth against expectations of 1%.

We’ve written a lot about the Bank of Canada’s data dependency in the last week’s and thus it comes to little surprise to our readers how this release has shown such strong sensitivity.

With that in mind, we eagerly await further comments from BoC Governor Poloz on Tuesday. Against the backdrop of the latest data-points, it seems like another interest rate hike this year is far away.

In addition to that, we have a unique combination of releases for Friday: The Canadian Jobs Report will be released simultaneously with the GDP data for September. We’re still analysing the historic release times in order to determine the optimal setup, so make sure to check out the Trade Plan the day before.

OPEC is set to meet by mid-week. After Saudi Arabia and Russia seemed to have found common ground it seems like nothing is in the way for a joint production cut. As Reuters reports, the meeting is set to last a mere three hours, an extraordinary short schedule for the oil-producing nations, whose meetings historically lasted into morning hours of the next day.

Lastly on a personal note: Our developers spent the last weeks working on some new features that we’re happy to announce now: check out the article about them here.

That’s it for this week by us. Hope you enjoyed our weekly summary. Any comment, like or share is appreciated. Enjoy the remaining part of the weekend and have a successful start to the trading week.