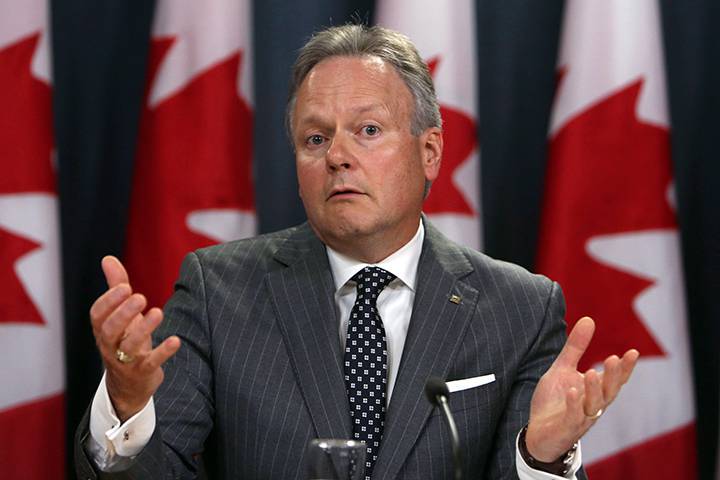 Week 42 Review: Increased Headwinds for the Bank of Canada

Week 42 has come to an end and it’s time to review some memorable events:

There was little data coming out of the US this week. Most notably, the Trump Administration made some considerable progress on the Tax Reform policies which spurred some Dollar inflows on early Friday morning. Looking ahead, we await the Advance GDP data on Friday.

Carney reiterated in his testimony on Tuesday that a rate hike might be needed in the months ahead. However, the week saw some mixed data from the UK this week.

CPI hit the 3% mark, it’s highest in 5 years, just as the market had expected.

On Wednesday we saw some slightly positive deviation in wages, though overall they have gone down to a 2.1%.

Thursday’s Retail Sales disappointed clearly with a -0.7% miss on the m/m core numbers. This was the only event that prompted a signal for our clients from the UK releases and it turned out to be a really nice one.

In addition to the nice spike another positive note that our data providers for UK data have been really timely as of lately and we saw many great entries on this report. 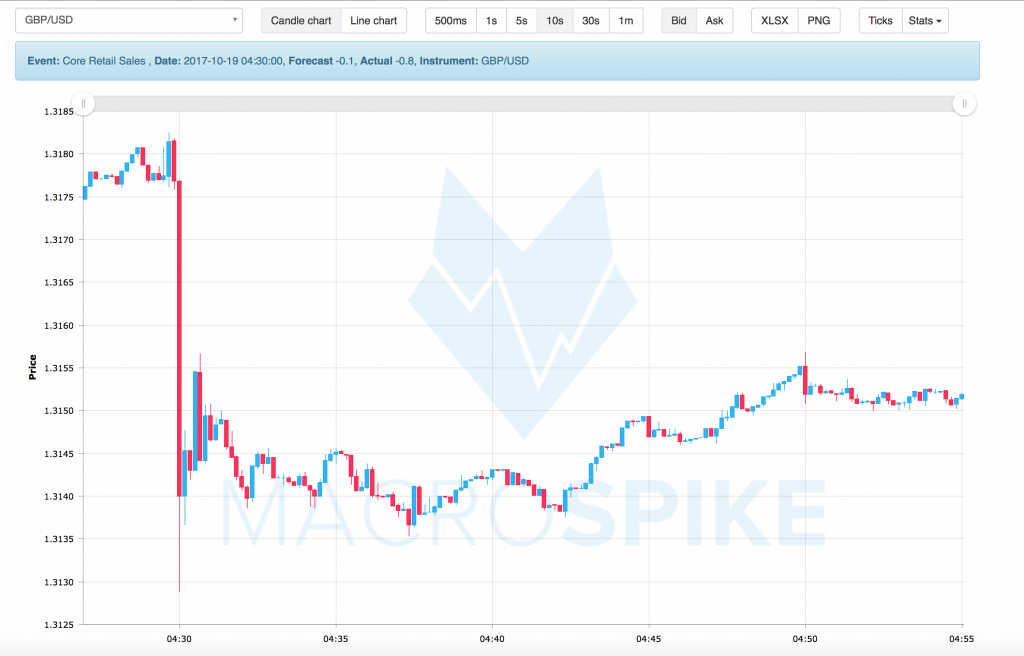 Overall we did not see clear evidence to support another move from the BoE on Nov 2 and the Pound ended lower at the end of the week.

While markets are still pricing in a 78% chance of a hike the week after next, it is still the lowest level since September. 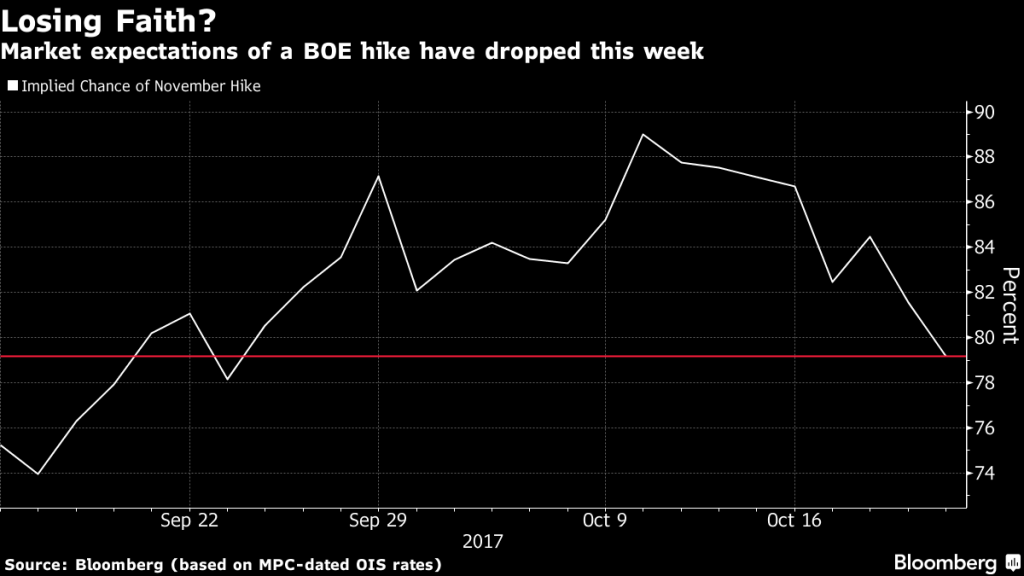 A similar percentage of analysts polled by Bloomberg is confirming that.

That said, we await Britains Preliminary GDP numbers for the third quarter on Wednesday. They will likely be of high interest for the market and provide insight if the economy still has enough slack for the BoE to remain on the sidelines.

Though CPI managed to grow at a rate of 0.2% m/m, the highest since May, it failed to keep up with the market expectations of 0.3%.

We have seen a continuous rise in CPI since mid-year. However, the last numbers all disappointed analysts, indicating that some may be overstating inflationary pressures in the Canadian economy.

Core Retail Sales also disappointed, with a drop of -0.7%, a whole percent less than expectations of 0.3%.

As a result, the Canadian Dollar lost ground and fell over 100 pips on the initial reaction. 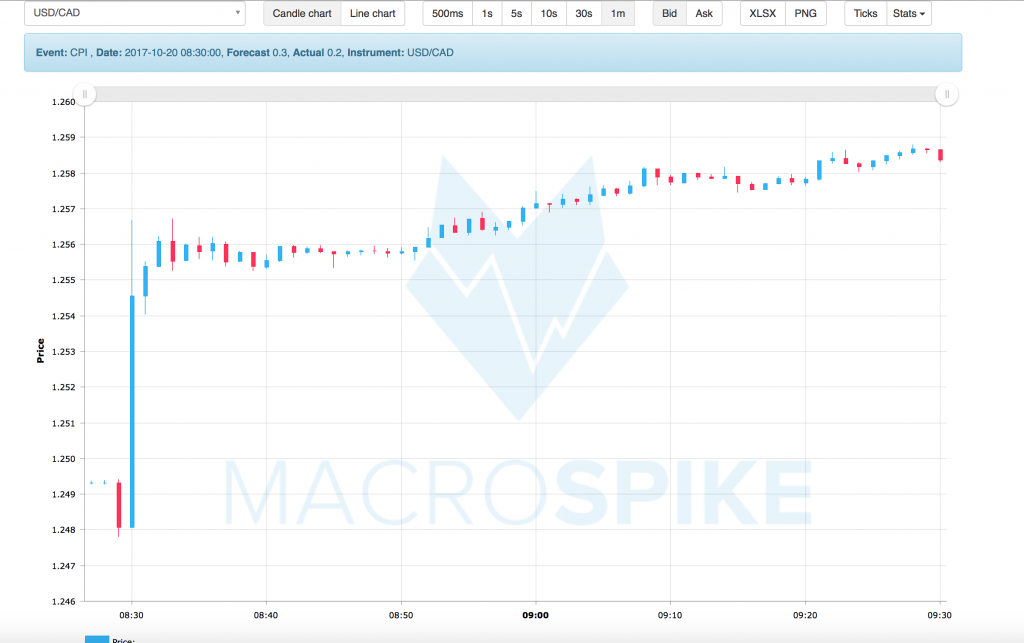 This stark reaction comes to little surprise to our readers. As we pointed out BoC Governor Poloz announced last week that they are monitoring data very attentively and remain “data-dependent”.

Against a backdrop of these disappointing releases, we see increased headwinds for those expecting the BoC to announce another rate hike on Wednesday, following two hikes earlier this year. Future implied rate odds for a move as early as next week shrunk to 18%, while those for another hike this year fell from 75 to 41% on Friday.

Simultaneously the BoC will release their quarterly Monetary policy report that will provide further insights into the analysis at the central bank. At 11.15 EST Governor Poloz will also face the press and provide answers about the central bank’s decision that day.

This is by far not the only interesting rate statement we expect in the week ahead.

On Thursday, the ECB will release Eurozone’s Main Interest Rate. Though likely no change will happen there, of even greater interest will probably be how the ECB’s Board decides on the future of the central banks bond purchasing program, PSPP. It is widely expected that Draghi will announce a reduction of their bond purchasing program by 20 bln €. Should this number be even greater it could have a sizeable effect not only the EUR exchange rate but also on global bond and equity markets.

In addition, we await Interest rate statements from Norway, Sweden, Turkey and Russia.

Moreover, Australia’s CPI numbers are due on Tuesday.

Our full calendar is available here. Trade Plans will be updated in on the eve of every event.

It’s an unusually busy week for a month’s end with many events promising high volatility.

Everybody enjoy their weekend and have a great start into the next trading week.