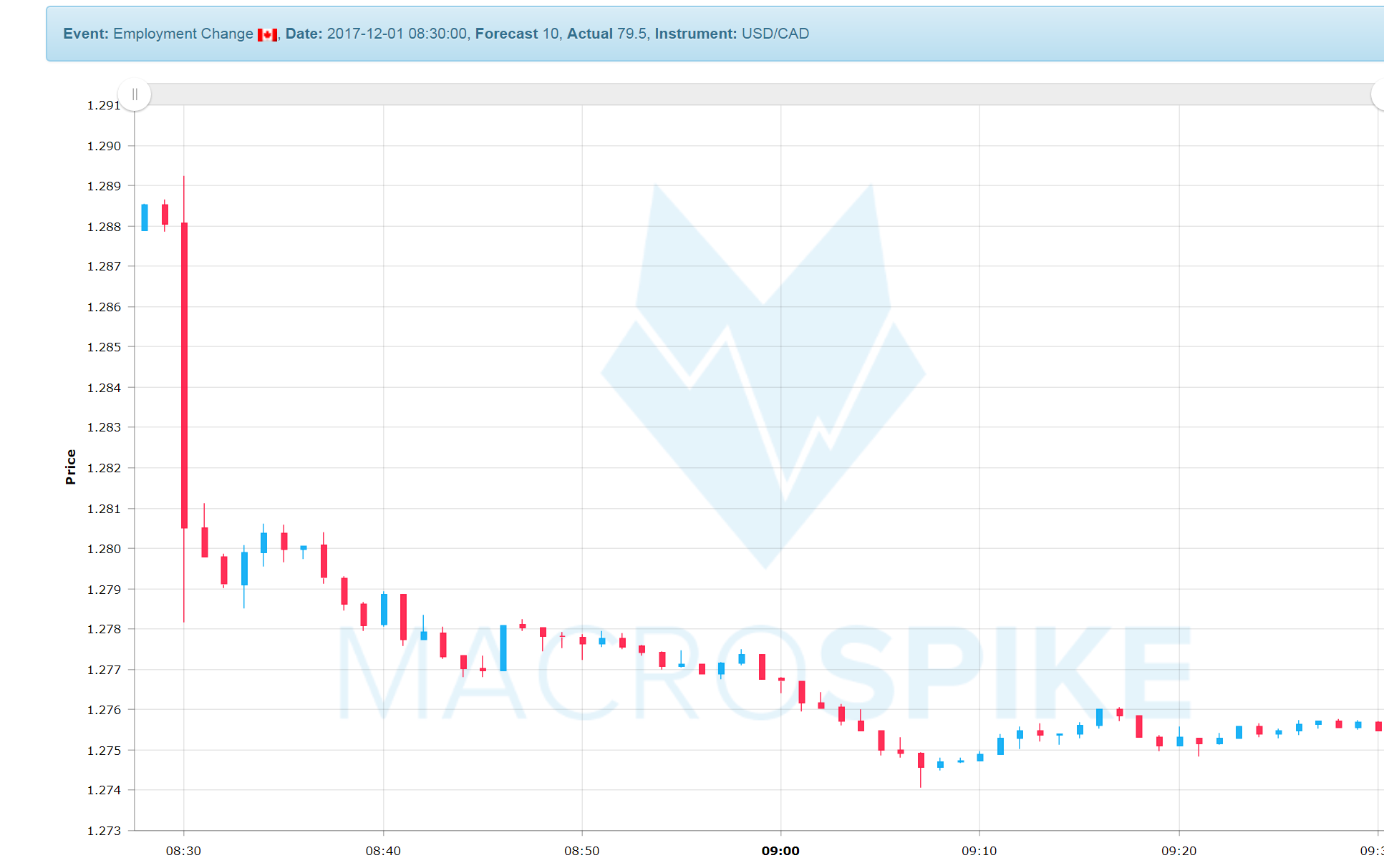 We are entering the last month of the year and despite that December has arrived, the next week is looking extremely hot for economic news. Welcome to MacroView for week 48. Let’s review some of the notable events that happened last week and have a look what’s for the week to come:

The second revision of US Q3 GDP showed that the American economy grew by 3.3%. This was largely in line with expectations and helped the US-Dollar continue its recovery – after stark losses following the release of the FOMC Meeting Minutes last week. The 2-Year Note increased its yield premium to the European Notes.

The major news came not in form of economic data, but again of the Presidential Administration:

The Proposal for the major tax reform passed senate this weekend. This marks a big win for the Trump administration, whose plan it is to sign the bill by year-end. The Tax reform likely will slash corporate taxes from 35% down to 20% and is the biggest tax reform in the US in decades. Though it will likely reduce government revenues and eventually lead to higher government deficits, economists expect the tax reform to have serious impacts on inflation. A successful implementation will likely play a role in the future path of interest rates. As the recent Minutes showed, low inflation rates have been the major concern of Fed doves. Thus, the new tax bill may lead designated Fed Governor Powell to raise interest rates faster in the year ahead.

Next week we await several key indicators for the USA, most importantly the Jobs Report on Friday:

Current median expectations are for a rise of 200k, following 216k in November. Average Hourly Earnings are expected to have risen by 0.3% m/m. Standard deviation is 24, down sharply from the 46 last month. It looks like the effects of the Hurricanes in September are beginning to ease a bit and forecasts are not as widespread as in the previous two releases. Keep an eye on our Trade Plan, that we will update over the course of next week.

This marks the last release before the Fed is meeting on December 18th where it is widely expected to raise rates  Fed Funds Futures have fully priced in a hike and it seems like this is a done deal. 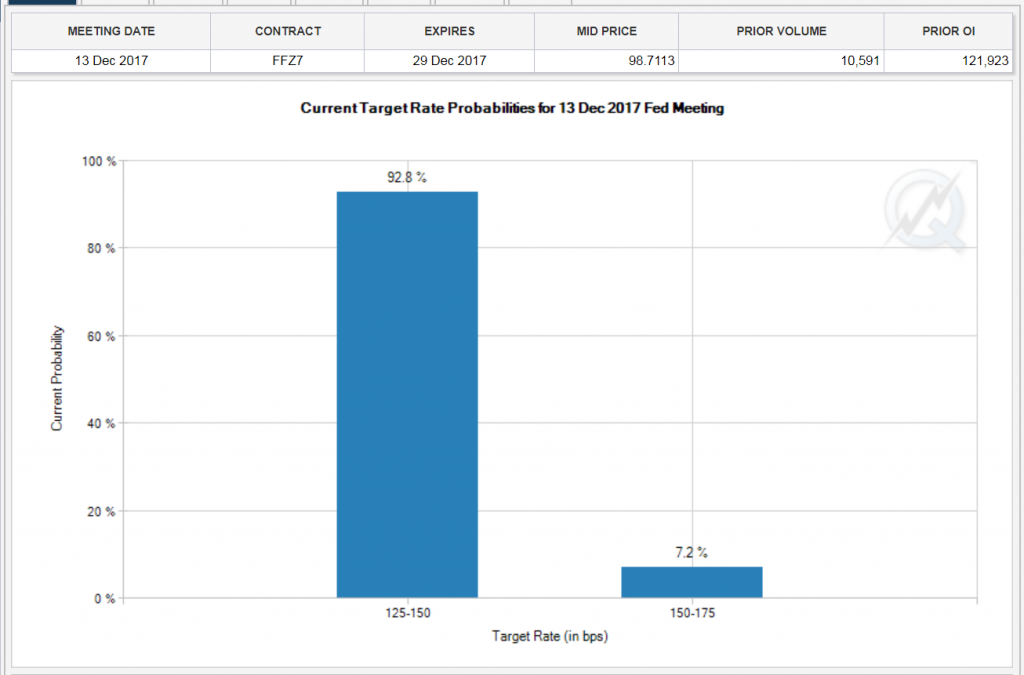 Friday’s Jobs Report was nothing less but huge. The Candian job market grew by 79k jobs last month, the most in 5 years, StatsCan reported. The report comes amid growing concerns over a slowing economy.  After a contracting GDP the month before and a disappointing CPI, the Loonie had lost ground since late September. These fears were slashed during the latest release and the CAD jumped more than 150 pips following the announcement. 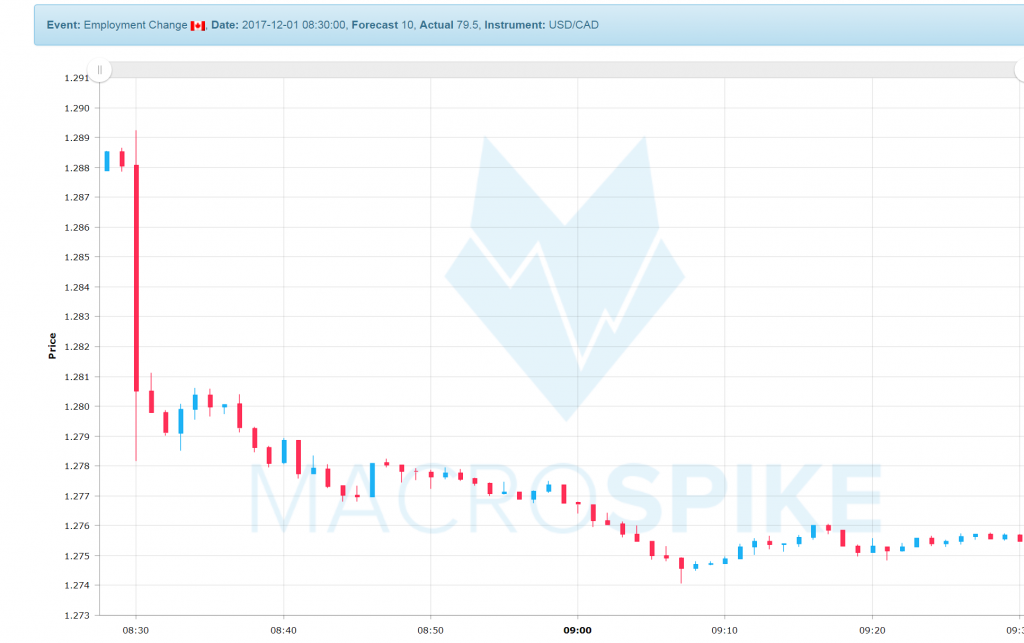 Though the BoC is meeting next week it is expected that the central bank will hold rates steady at 1%. Of the 31 economists polled by Reuters 28 expect no change, while 3 expect the central bank to raise rates to 1.25%.

The latest Jobs Report confirms that the slack in the labour market is diminishing much faster than anticipated, laying grounds for another rate hike. However, most economists pushed their calls for a hike into April of next year, citing unclarity about NAFTA negotiations.

“The Bank of Canada remains more hesitant and the many uncertainties, including the outcome of the North American Free Trade Agreement (NAFTA) negotiations, should prompt it to wait until next April before continuing its monetary tightening,” noted Benoit Durocher, senior economist at Desjardins.

“We expect a slowdown (in economic growth) in the second half of 2017. Inflation rates also decreased in October. This makes more space for the Bank of Canada.”

In addition to that, we await a wide range of economic indicators: Services and Construction PMI as well as Industrial Production from the UK, Australian GDP numbers and the Interest Rate Statement by the RBA. There is no change expected from the RBA at the latest meeting and most analysts don’t expect any changes in the foreseeable future.

This will likely be the last full trading week of the year. Seasonality shows that after the first week of December liquidity dries up progressively over the remaining month. This will also impact the reliability of spikes.

That’s it for this week from us. Enjoy the remaining part of the weekend and have a successful start to next week.