It was quite a week for FX markets and volatility does not seem to abate in the week ahead, as we expect several high impact economic releases.

Welcome to the MacroView. Every week we review memorable macroeconomic events and look out for what to expect in the days to come.

The Dollar sold off strongly across the board. DXY finished down more than 2.2%. This is the worst start for the greenback in over 30 years.

Treasure Secretary Mnuchin made headlines on Wednesday when he welcomed the weaker dollar as beneficial for the US-economy sparking concerns over a race for competitive devaluations.

Meanwhile, US GDP came in at 2.6%, 0.4% lower than anticipated by analysts. Even more surprisingly, Core PCE, the FED’s preferred inflation gauge, came at 1.6%, -0.3% lower and at the lower bound of all forecasts. The Dollar initially fell 20 pips but the spike was short-lived and did not manage to spark continuous downward pressure.

The week ahead will be extremely busy for the Dollar. Wednesday marks the release of the quarterly Employment Cost Index. This release performance has been rising steadily. Later that day we await the US Interest Rate and FOMC Statement. While the Fed is expected to keep rates unchanged, a Reuters poll shows that the next hike could happen as early as March.

Fed Fund Futures currently imply an 80% chance for a hike in March. Economists expect the central bank to hike a total of three times this year. But there are chances the Fed might hike even more aggressively than previously thought. The number of analysts expecting four hikes has increased since the last poll in December. Though the Fed will not update their Economic Projections this time, the Statement could shed light on the current assessment of the board and provide the necessary fuel to flip sentiment in the medium term.

On Friday, we also await the January Jobs Report. The US-economy seems to continue growing relentlessly. Economists forecast the jobless rate to average 3.9% in 2018 and 3.8% in 2019. Nevertheless, the strong employment does not seem to translate into higher wages just yet.

Currently, forecasts for Non-Farm Payrolls are at 180k, while Average Hourly Earnings are expected to rise by 0.3% m/m. In face of this situation, our focus will once again lie in a deviation of both NFP and AHE numbers. Our updated Trade Plan will be released on Friday here.

While the Dollar lost ground against most currencies, this effect was particularly strong against its biggest trading partner. ECB president Draghi made clear that interest rate changes are off the table for the foreseeable future. Nevertheless, his acknowledgement of the Eurozone’s strong growth was enough to fuel the rise of the economic bloc’s currency even further. The EUR rose over 120 pips and pushed through the 1.25$ mark. It closed at its highest level in over three years. Interestingly, Draghi also said, should the current US-government decide to target a weaker Dollar, it could force the ECB to delay their exit from the APP. 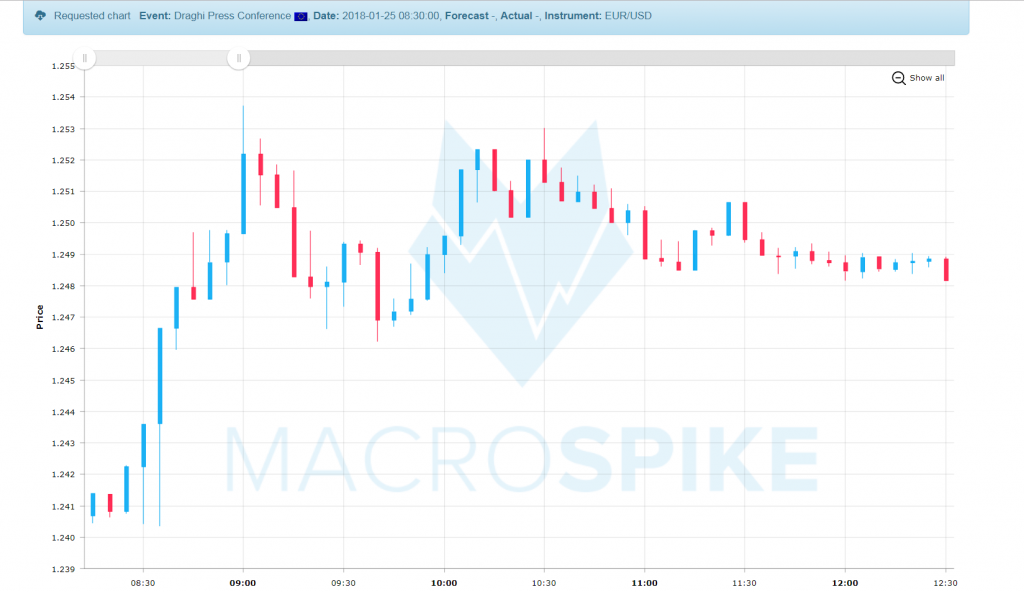 Next week we await EU CPI Flash Estimate. Expected at 1.3%, and 0.1% lower than the previous month, it seems to underline that the central bank is still miles away from their target of >2%. This report has been performing pretty well and evolved into a staple recently. Last week we took note that EUR/Dax correlation at the German Manufacturing PMI had reversed, an early sign that  European indices may start to perform better on inflation-related data. We are awaiting the release eagerly.

This week saw the release of several interesting, yet conflicting data points out of Canada. On Thursday, November’s Core Retail Sales posted a monthly growth of 1.6% (+0.8%) while headline data rose only by 0.2% (-0.5%). The conflict arose as electronics sales jumped a massive 12.9% due to Black Friday sales, the highest gain on record.

Friday’s CPI data also failed to show a clear direction. Headline inflation came in slightly worse than expected (-0.4 vs -0.3% expected). Common CPI,  one the three inflation indicators the Bank of Canada uses, came in at 1.5% (0.1% worse than expected). CAD initially edged lower but the spike was short-lived. Analysts expect the BoC will likely remain on their anticipated tightening path. Still, Governor Poloz said in Davos, that he does not know where interest rates would go from here, as the central bank remains data-dependant.

We will get another shot at the CAD this week, as we expect the release of the Canadian GDP numbers. Last month, a -0.2% deviation resulted in a massive 70 pip spike. Canadian data is extremely sensitive and we look forward to this release.

In addition to that, there are numerous other releases. Keep an eye on our calendar to stay up-to-date.

That’s it for this week. Enjoy the remaining part of the weekend and have a successful start in the next trading week.